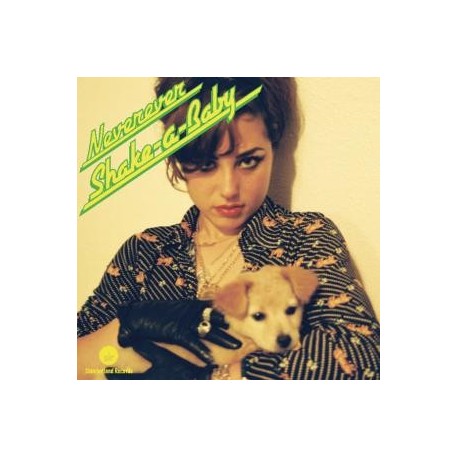 Who can decipher the true origins of Neverever? Some say it started on the roadside in Malibu when a truck driver named Eric Fisher and his childhood buddy Shaun Puklavetz picked up Joe Meek’s great niece and nephew, Jihae and Wallace Meek. Others believe that it began a year earlier when Neverever’s lost classic Angelic Swells was released on legendary pop mogul Mike Schulman’s Slumberland Records.

Whichever one chooses to believe, it was after consulting their book of Sacred Symbols of the Ancients that the Meeks realized Fisher and Puklavetz’s rhythmical bond was most likely destined to be the missing piece of their puzzle. A mutual appreciation for Dave Hill’s (of Slade fame) haircut soon sealed the deal one night after practice in Puklavetz’s hot tub.

The four began hallucinating endlessly about songs that could fill the void between Sandy Salisbury’s “Do Unto Others” and Comet Gain’s Casino Classics. These visions slowly crept across Los Angeles stages like a purple smoke bomb engulfing the artists. Shortly thereafter, crowds caught on and gaggles of girls and boys began flocking to their shows in fear that the flames which burned would someday descend back into smoke.

Shake-a-Baby is that technicolor smoke turned to solid vinyl. From the couples-dance swoon of “Baby Oil and Iodine” to the latin-tinged glam-pop of “Mexicoco,” the newly revitalized Neverever cooks up a heady mix of classic power pop styles. “Bunker Spreckles” is a swinging little tune, featuring a typically catchy vocal melody and a stick-in-your-head keyboard line. “Venus” slows the tempo down for a twangy slice of doo-wop pop, while “Wedding Day” is a rambunctious power pop gem that would slot in nicely on either of the first few Blondie albums.

Cut from the same classicist pop cloth at their debut album, Shake-a-Baby finds Neverever sharping their tunes, honing their hooks and brightening their palette.