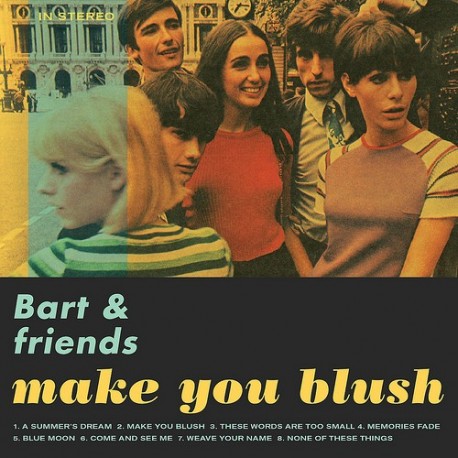 Indiepop purists rejoice! Bart Cummings has reunited with his former Shapiros bandmate Pam Berry & B. & F. friend Mark Monnone to help out on his first cd since I Was Lonely 'Til I Found You (2001, Library Rcds).

3) These Words Are Too Small

8) None of These Things

As underground indiepop icons go, Bart Cummings is certainly one of Australia’s most enduring and best kept secrets. A founding member of The Cat's Miaow and later of Hydroplane and Pencil Tin, he has spent two decades warming the hearts of wistful bedsitters the world over. Intimate and conversational in style, Bart’s songs are something of a cross between Yo La Tengo, the Go-Betweens and Felt. And with his inclination for brevity and knack for spinning the most ordinary of situations into something to hold dear, he may also be the pop world’s closest link to Raymond Carver. Over the years, Bart has stayed true this formula; Make You Blush heralds his first new recordings since Bart & Friends' I Was Lonely ’Til I Found You mini-album of 2001, and (thankfully, to these ears) he is showing no discernible deviation from the music he was making in the mid-90s: dreamy, jangly and sublime.

And just like old times, Bart has found himself surrounded by some highly esteemed pop practitioners. Sharing lead vocals (from her adopted London home) is Bart’s former Shapiros bandmate Pam Berry. Pam, herself an indiepop figurehead of the highest order, has fronted some of the most loved and influential indiepop bands ever (Black Tambourine, Castaway Stones and The Pines to name a few) and also co-founded the popular Chickfactor zine. Pam’s clear-as-a-bell delivery and old-timey vibrato add a warmth to the songs here that radiates well beyond their plaintive inner walls. On “A Summer’s Dream”, for instance, she reflects on a doomed romance with a knowing matter-of-factness which manages to transcend the song’s bleak inevitability and somehow restore a sense of hope. With this kind of breadth in the writing, Rodgers & Hart’s “Blue Moon” is the perfect choice for the set’s only cover version.

The rest of the band are no slouches either. Guitar, bass and drum duties are seen to by Louis Richter, Mark Monnone and Stanley Paulzen respectively; old friends and veterans of such bands as The Lucksmiths, Mid-State Orange and Fred Astereo. With Bart visiting Melbourne briefly from his home in Ballarat, the band worked double-time on Bart’s concise pop nuggets, exercising his breakneck approach to arrangement and recording. The basic tracks were consequently put to tape within the first few run-throughs of each song. Recorded and mixed by James Dean (of Tugboat fame) at his East Brunswick studio, the resulting eight songs on Make You Blush shine through as immediate and extremely fresh.