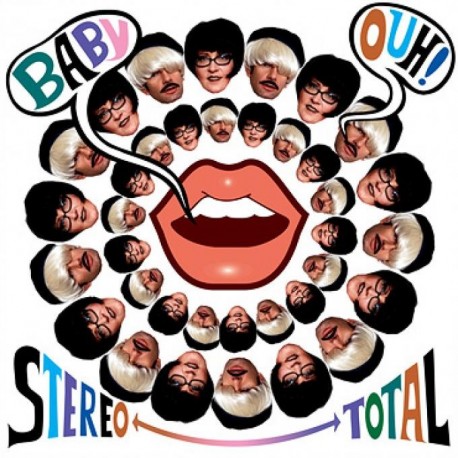 Raise your hand if you know a group with a more punk attitude today. Weren’t we just talking about that Spanish-sung compilation disc that was “No Controles” a few months ago? The thing is, is that that pair of pop culture agitators (and terrorists) that are Françoise Cactus and Brezel Göring are back with a new disc. Seventeen songs selected from more than 40, with highlights like “No Controles” from OLÉ OLÉ, and “Voy a Ser Mamá” from ALMODOVAR Y MACNAMARA (this time in English!!), revisitations of incomparable characters (Divine in “Divine’s Handtasche” and Andy Warhol in the song named after him), versions of all kinds, from Brigitte Fontaine (“Barbe À Papa”), to KRAFTWEERK (“Tour de France”), including Rita Pavone (“Wenn ich ein Junge wär”, which was also made popular by Nina Hagen in 1979) and the Canadian trio SOUPIR (“Larmes De Mêtal”), impossible punk (“Babyboom Ohne Mich”), special journeys to unforgettable melodies (“Baby Ouh”), but above all their on-target quality that is as identifiably theirs as a flag and that only they can sufficiently raise with pride (“Alaska”, “Lady Dandy”).

This is a disc with STEREO TOTAL letting loose its most guitar-heavy side, like what is coiled within the ferocity of LE TIGRE and the immediacy of THE RAMONES. Such a cocktail can only turn out to be an incredible collection of amazing choruses, new proof of why STEREO TOTAL are and will continue to be such a unique band, inimitable, with an unmistakable personality and a boundless, spot-on immediacy. They themselves have used the perfect words to define themselves, while talking about this latest work: hysterical glamour. No kidding.