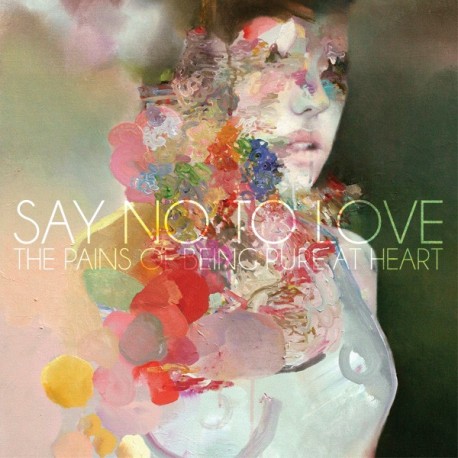 A co-release with Fortuna Pop! in England

All copies are pressed on sea foam green vinyl and include a code for a free download.

The Pains of Being Pure At Heart had quite a 2009, and 2010 is shaping up to be even better. They released their self-titled debut last February to universal acclaim, racking up features in magazines like Spin, Rolling Stone and NME, earning Best New Music status from Pitchfork, and touring the US and Europe non-stop. They began 2010 with a month-long tour of Japan, New Zealand and Australia, but somehow managed to take a breath to record this fantastic new single.

Say No To Love is a big step forward for the band, combining The Pains' now-trademark youthful energy and infectious song craft with a more considered approach to the studio. The result is what we think is the best Pains single yet, a peerless slice of pure pop just right for the summer.

Says the band's Kip Berman: "It’s got 3 chords, a fuzz pedal and lots of feelings. But instead of recording in the basement like we did for our album and both EPs, we recorded in an actual studio (Stratosphere Sound in New York). We tried hard to make it sound, as Peggy would say, 'life affirming' and we’re pretty excited about how it turned out."