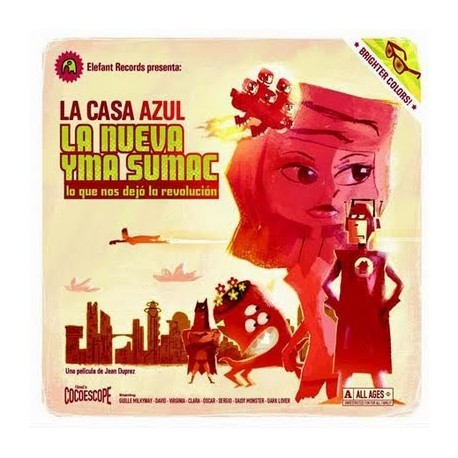 It’s a special, limited edition disc that also contains a data track with the video for “La Nueva Yma Sumac” (in Spanish and Japanese), and screen savers for computers and mobile phones.

“The sexual revolution” left us with unforgettable moments, a never-before dreamed of happiness, and an endless feeling of pleasure. The concerts were authentic exaltations of uncontrolled happiness, collective madness and a truly therapeutic release. LA CASA AZUL’s newest work is a gift for fans, a small souvenir that closes the magical era. LA CASA AZUL’s new journey is still full of fantasy – a fantasy that begins in their new video, “La Nueva Yma Sumac”, an incredible piece by the great master Duprez (responsible also for the album design) and a team made up of true fans of the group. It is an ambitious project that makes this video unique and unprecedented in the history of music videos and animation in our country, and that will undoubtedly be talked about outside of our borders as well.

Some of Guille Milkyway’s most admired personalities have unconditionally given themselves to “La Revolucion Sexual” and collaborated on this disc, making it the most international project yet by LA CASA AZUL.. Françoise (STEREO TOTAL) sings a new version of “La Recolucion Sexual” in German, which Guille rerecorded almost entirely. Guille himself was in charge of the vocals in English and the exquisite Yeongene does her thing on the Korean version. Guille and Duglas T Steward (BMX BANDITS) share vocals on “Bad boys”, the English version of “Chicos Malos”, which is also a heart-felt homage to Chris Montez, and THE APRILS remix “La Nueva Yma Sumac”, singing it in Japanese. Inspired by HELEN LOVE’s “Jump Up & Down”, Guille constructed an authentic dance hit that is not lacking in small homages and references to Plastic Bertran, 50’s rock and roll and of course surf, one of their great passions. The disc includes three versions - Joan Manuel Serrat’s “Señora”, THE JACKSON FIVE’s “I Want You Back” and “Love Is in the Air” by John Paul John - and it closes with four live songs taken from one of their last concerts in Barcelona.