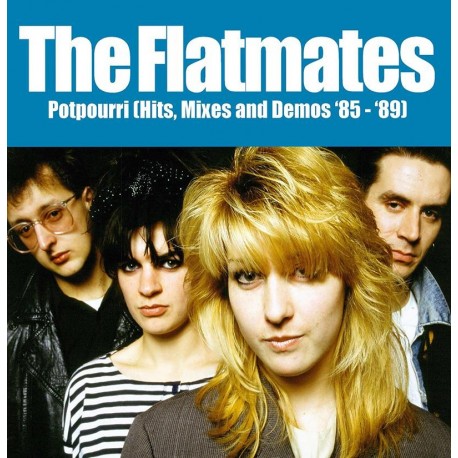 The Flatmates released five singles between 1986 and 1988 and recorded 3 sessions for BBC Radio 1, including 2 for the legendary John Peel.. Their singles all reached the upper regions of the UK Indie Chart, culminating with a number one placing for “Shimmer”. Formed in Bristol in summer 1985, by Martin Whitehead and “Rocker”, The Flatmates formed part of the first wave of the mid-eighties resurgence of indie guitar-pop. Although not appearing on the NME tape that spawned the genre, The Flatmates were widely regarded as being part of the C86 scene. in the mid 80’s they ran (and gigged) with that crowd, but spurned the coy affectations of “cutism”.

The Flatmates arrived at a time when pop was shiny and nice girls didn’t play in rock bands. They never made it to the pop charts, but shortly after their demise, the likes of The Primitives, The Sundays, The Darling Buds, Lush and Elastica did.

The Flatmates disbanded in early 1989 before they could release a proper studio album. This double album release gathers together the best recordings the band ever committed to tape including singles, b-sides, compilation tracks, demo’s and everything in-between. Limited to 500 coloured vinyl copies, it is a truly essential artefact of its time.

The Flatmates have reformed and will play their first live dates in over 20 years in August and September 2013.

I Could Be In Heaven

When I’m With You

If Not For You

Happy All The Time