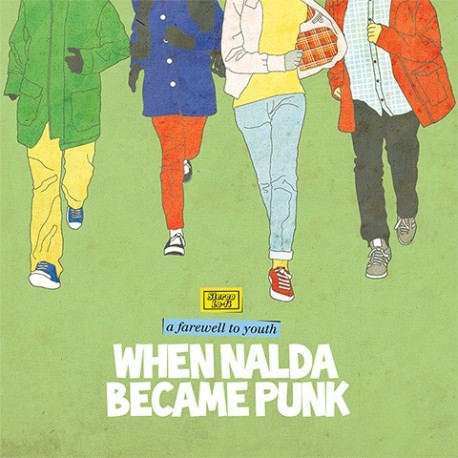 WHEN NALDA BECAME PUNK : CD A Farewell to Youth

For Fans of Heavenly, Helen Love...

7. Moderns, You Should Stay Home

Elena Sestelo started the group as a solo project in 2006. She self-released some lovely digital singles (one under the name Nalda) and also took part in Bubbletone Discos digital singles club. In 2011, the group expanded into a duo with Roberto Cibeira joining in. That summer they released their debut 7" for theme song "When Nalda Became Punk" on UK indie pop label Pebble Records.

In 2012 they played several shows, including the Madrid Popfest, while working on recording their album. A Farewell To Youth was recorded and produced in Vigo, Spain by Eva Guilala and Ivan Juniper at Kaiju Studios and was mixed and produced by Ian Catt, best-known for his work with legendary artists Saint Etienne and The Field Mice as well as Shelflife label-mates Dylan Mondegreen and The Proctors.

Inspired by the classics (Dolly Mixture, Heavenly, and Helen Love) as well as some of Spain's finest (Moving Pictures, La Pequeña Suiza, and Vacaciones), When Nalda Became Punk are set to lead the next chapter of brilliant Spanish bands into the world! Elena's vocals simply shine over the jangly guitars and playful synths and drum machines. Their songs are quirky and fresh, with plenty of spirit. Ten tracks (plus a bonus song) full of pop perfection! Lead single "When It'll Come" is easily one of the catchiest songs we've heard all year.