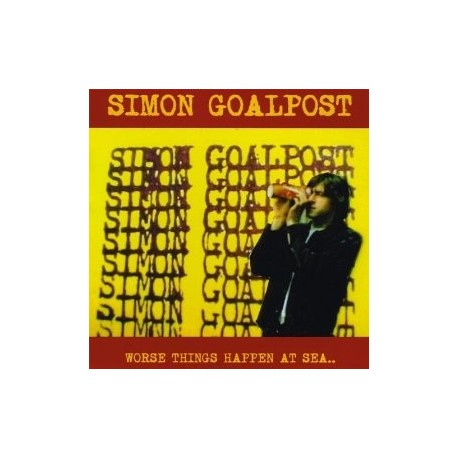 Simon Goalpost is an ex member of Thrilled Skinny(www.myspace.com/thrilledskinny) and current member of NOISE ANNOYS SIMON (www.myspace.com/noiseannoyssimon). Also formed a Lo-Fi outfit under the name of V-Neck,and recorded "soap on a rope" the unreleased mini Lp. Simon recorded with Shaun (head of Glut Records) under the name of Angry Chair who backed Goalpost on the "Better things happen at sea" EP.Shaun playing shambolic drums and any other objects he could get his hands on!!. Simon was the lead singer and Bass guitarist in Thrilled Skinny who released over a dozen records on their own Hunchback Records and also released a CD for Artlos Records..They played over 200 gigs in the UK and Germany and played some great support slots with the Wedding Present, Snuff, Cud, Mega City Four, Shrug, the Losers, The Senseless Things, The Keatons to name a few. Thrilled Skinny became favourites of John Peel who played all their singles and gave them a session for his Radio One show in 1989. Simon Goalpost released an EP on the mighty GLUT RECORDS..uner the title of "Better Things Happen At Sea"..the ep included the storming "lets go down the allotment".and "off shopping trolley (later to be recorded with Thrilled Skinny on the "not half an ep" EP)..Goalpost also appeared on a compilation LP on his own label which included tracks by Thrilled Skinny,Shrug,The Keatons,Jowe Head,the Losers,Buy off the Bar...the Goalpost track was "let's go and visit mr island".Simon Goalpost played a few solo gigs one supporting the Keatons up north and also appearing at the legandary MOLECULE CLUB in Luton alongside Thrilled Skinny, Hell smartie,The engagement Party,the chicago brothers. SIMON IS CURRENTLY WRITING AND PERFORMING IN NOISE ANNOYS SIMON...A FOUR PIECE BLISTERING INDIE POP BAND FROM EAST DEVON WHO HAVE RELEASED A 4 SONG CD EP AND HAVE A DEBUT CD LP OUT IN MAY 2008 CALLED "SAY IT 'LL KNOW IT" AND RELEASED ON SIMONS OWN LABEL POP NOISE RECORDS. Thankyou for reading this....keep the scene good!!!!