> SUPPORTS>STEINBECKS (the) : Far From The Madding Crowd 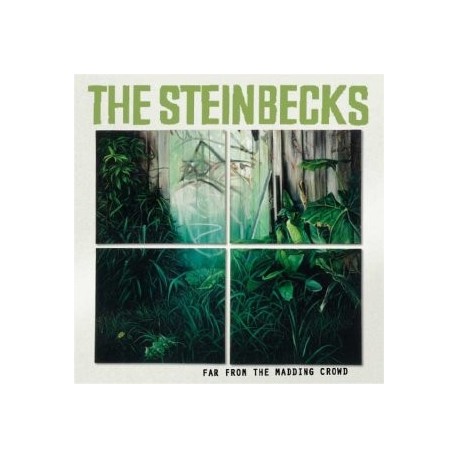 STEINBECKS (the) : Far From The Madding Crowd

On Far From the Madding Crowd Steinbecks' songwriters, brothers Josh & Joel Meadows, team up with their cousin Tali White (Lucksmiths, Guild League) to craft one of the first shining pop gems of the post-Candle Melbourne pop scene.

The Meadows brothers have been writing, recording and releasing songs about things that matter to them for longer than either care to remember, but Far

> From the Madding Crowd, released on 2 April 2007, is their first release for

three years and marks the first time the brothers have written and recorded with their cousin.

Two songs - 'The Doppler Effect', a powerful pop punch that dissects the city/country relationship, and the gorgeous 'Have You Ever Looked After a Song?' - are sung and co-written by White.

Other stand-outs include opener '1987 + 1994 = 2007', in which the 'becks somehow manages to blend the sensibilities of the Pet Shop Boys with the sensuality of Pavement, and the angsty nature hymn, 'Moon & Stars'.

Musically the record contains echoes of Nick Drake, Lloyd Cole, My Morning Jacket, The Chills and Big Star. Lyrically, the 'becks tackle questions as diverse as: what happens to modern society when the oil runs out? why is compromise not a dirty word when you're in love? will we ever learn to learn from the past? and if you could go back to being a teenager, would you?

The world is in a mess, The Steinbecks seem to acknowledge, but faith, hope and love remain. Far From the Madding Crowd exist within this really and tries to tell the story of it through the only medium The Steinbecks know: the pop song.

Background on the band

The Steinbecks emerged in 1994 from the ashes of seminal early '90s pop combo The Sugargliders. The 'gliders released a string of singles and one album for legendary English pop label, Sarah Records.

Far From the Madding Crowd is The Steinbecks' fifth record after At Home and Abroad with The Steinbecks (1995), From the Wrestling Chair to the Sea (1997), Recorded Music Salon (2000) and Branches and Fronds Brushing the Windows (2004).

The Steinbecks are the Meadows brothers plus Gizo (bass) and Jerry Rinse (drums), with regular assistance on keys from the Daytime Frequency's Matt Sigley.

7) Every Empire Must Fall

9) Have You Ever Looked After A Song?

12) Blank Pages (Are starting To Fill)