> GAINSBOURG Serge : Songs On Page One 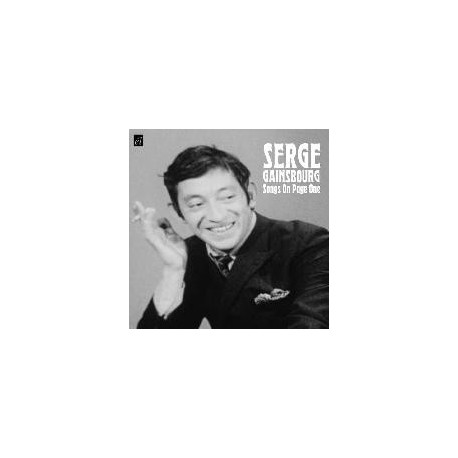 GAINSBOURG Serge : Songs On Page One

The EL edition comprises his shockingly brilliant debut album, a live track from the same period transmitted on Radio France and fine versions of songs from this momentous first album recorded with commercial success by Parisian comtemporaries Michèle Arnaud and Jean Claude Pascal.

Serge Gainsbourg has been one of, if not the, major single international influence on British and American independent pop music; Portishead, Franz Ferdinand, Tricky, Jarvis Cocker, Beck, Arcade Fire, Placebo, PJ Harvey, Brett Anderson, Mick Harvey, Momus and Belle and Sebastian have all claimed him as mentor In France, Gainsbourg is nothing less than an institution. As Jane Birkin put it recently: "Now French culture is talked of as before and after Serge."

Released 16/03/09. There are many standard-issue personae to which an aspiring rock star might be drawn, but one has always been cooler, darker and sexier than all the rest. It is that of the artist who single-mindedly pursues his creative muse while embracing the full panoply of self-destructive, decadent, badboy behaviour: heavy drinking, frequent drug use, committed womanising, a general fuck-you attitude to both public and media, a casual disregard for society's sacred cows and taboos, and a self-belief bordering on the messianic. For three turbulent decades Serge Gainsbourg heroically exemplified all of the above - and much more.

He wrote and directed four controversial movies, he published a scurrilous novel, his records were often denounced as obscene and he was perpetually embroiled in scandal, whether for turning up drunk on a TV show and offering to f**k fellow guest Whitney Houston, recording a reggae version of Le Marseillaise, burning a 500 franc banknote on prime-time TV, or making a decidedly queasy video with his 13-year-old daughter Charlotte to promote their single, Lemon Incest. Summarising his approach to life and art, he said: "Without controversy it would all be very boring" and "For me, provocation is oxygen."