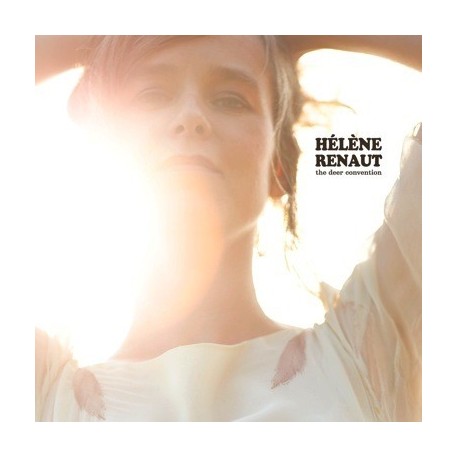 4.The Wisdom Of The Dove

8.The Way You Looked At Me

Somewhere on the coast of Northern California, whether amidst the watchful eyes of San Francisco's Mission District denizens or up the highway even further where the air is clearer, you'll find Hélène Renaut. Guitar in hand, she's hit up stages high and low and worked at carving out her own little corner in the world, preserving something otherwise intangible.

Renaut is French by birth and that influence, that sound – that idea of the chanson is something that carries over distinctly into her own songwriting. She's married this with a hopeful, wistful air that is more akin to American folk - and still there's this hint of the sweet primroses from the British Isles. It's all one.

The Deer Convention is a pocket-sized valise carrying a dozen of Renaut's most expressionist sentiments. It's something she's carried with her for the past few years - honing, polishing, finding the ins and outs of the song and letting them all become part of the big fabric. They naturally found a recording home in PanAmerican Studios, helmed by Jason Quever (Papercuts), where the album was captured almost nearly all live on tape, in one take. Additional help, flavor, and deep color was provided in parts by members of The Mumlers, as well as key individuals and friends Matt Montgomery (Adam Haworth Stephens), Jasmyn Wong, and Donovan Quinn (both Skygreen Leopards). The result is a lightly orchestrated, deeply personal world of acoustic guitars, strings, horns, upright bass and light drums - accented here and there by an electric guitar or glockenspiel line.

The Deer Convention fights in its own way against jaded sensibilities and rises up for the purity of songwriting. “Bumblebee” is pop song best appreciated among the wildflowers, while other tracks touch on the ease in which love can come (“To Be A Child”) or the difficulties when it doesn’t (“Wisdom Of the Dove”).

There are moments within that switch up mysterious travelogues with the most subtle of backdrops - putting Renaut in the role of navigator ("February's Daughter") aided by an electric guitar lead that is akin to Richard Thompson's Fairport work - but diffused, like a film in slow-motion.

"The Way You Looked At Me" sounds as if you took your favorite song by The Shirelles and threw it in the ocean and waited for it to return - battered and beaten into a new natural form. Old forms give new forms. Similar words could be typed out for "Keep Your Garden Clean" - a spin on an Appalachian ballad, or “Orpheus” – where the Greek myth serves as metaphor for the uncertainty of love in our modern world.

If there’s a constant in her musical routes, it’s the forever and always influence of artists like The Beatles and Nick Drake – impeccable pop music but with introspection at every turn. Beyond that, Renaut cites the lyricism of Joni Mitchell and Leonard Cohen, the vocal work of '20s and ‘30s female jazz singers like the Boswell Sisters or Bessie Smith, Karen Dalton, Bert Jansch, Donovan, the Kinks, and the Zombies' lush harmonies as key chapters in her development.

Through all of this - through all of the lyrical mysteries, the spirited takes on girl group sounds, British folk, curious pop, and dusty avenues that haven't been given a permanent title yet, there is still Hélène Renaut at the center, spinning tales, playing guitar - singing her experience, making it ours.