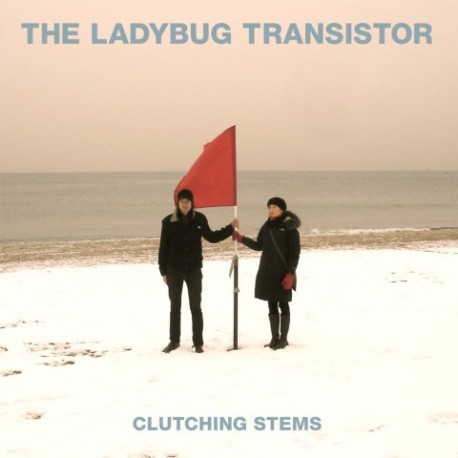 2. Light On The Narrow Gauge

7. Breaking Up On The Beat

Over the course of some sixteen years and six remarkable albums, The Ladybug Transistor have confirmed their standing as the preeminent exponents of lush, formalist pop music. With a superlative new record, Clutching Stems, at the ready, their pursuit of a singular musical vision remains as true as ever.

The group's growing confidence and ambition can be traced through their subsequent three albums: The Albemarle Sound (1999), which was hailed as "the last great pop album of the century"; Argyle Heir (2001); and The Ladybug Transistor (2003). Their penchant for classic pop remained, but the band had gradually forsaken their baroque, even psychedelic origins for a more expansive, timeless sound.

By this time, Jennifer Baron had left the band and Bell soon followed. For Can't Wait Another Day (2007), welcomed into the fold in their stead were Kyle Forester (who is also in Crystal Stilts) and Ben Crum. The result was a fuller sound and an occasionally darker edge to The Ladybug Transistor.

Shortly after the completion of Can't Wait Another Day, however-before the album was released-the band was confronted with the tragic loss of longtime drummer San Fadyl, who died suddenly as the result of an asthma attack. For a time, the idea of continuing without their beloved friend seemed unthinkable. Eventually, though, the band quietly gathered new recruits – Mark Dzula, Eric Farber and Michael O'Neill (who is also in MEN with J.D. Samson) – and embarked on writing a new album with Fadyl's memory squarely in mind.

The resulting effort is their forthcoming release Clutching Stems, a stunning collection of potent refrains and brought-to-one's-knees ballads. As ever, Olson is in fine form; here, his lyrics compel, detailing an overarching search to find one's voice in the face of moments that knock the wind and words right out of a person. These are stories of humbling heartbreak, profound longing, undoing distress, nagging regret, and coming-of-age awakenings-all set to invigorated pop arrangements featuring backing vocals by Frida Eklund. The new Ladybug line-up has found its own distinct vernacular that honours diverse influences and the band's own precedent sound. Clutching Stems assuredly underlines that while love can tear things apart, it can also capably mend them together once more. And, in doing so, it reminds us again of the band's magic: The Ladybug Transistor make music that is somehow both modern and timeless, universal and yet theirs alone.