> PAINS OF BEING PURE AT HEART (the) : Remix 12" Higher Than The Stars 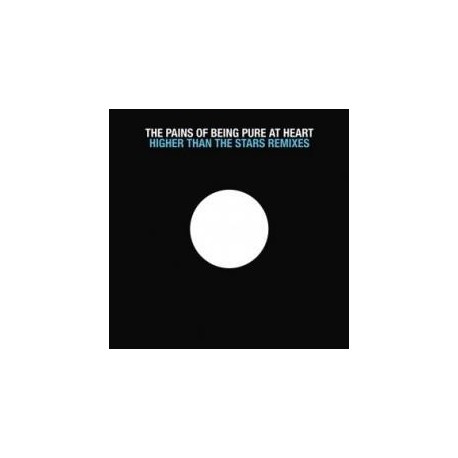 PAINS OF BEING PURE AT HEART (the) : Remix 12" Higher Than The Stars

3. Higher Than The Stars (Skanfrom Remix)

Not content to rest on the laurels of having one of the best and most talked-about albums of 2009, The Pains of Being Pure At Heart are back with four brand-new songs that show what the band does best – breathe fresh life into indie-pop with exuberance, charm and of course quality tunes.

“Higher Than The Stars” races along on arpeggiated keyboards and quickly strummed guitars, a perfect pop nugget that could be ripped from Robert Smith's songbook. Its unstoppable energy is pure Pains, though, and we expect to see a lot of ear-to-ear grins when the band busts this one out on tour. “103” has quickly become a favorite of the Pains’ live set and it’s easy to hear why. A fizzing slice of summertime noise-pop with all the melody, fuzz and fun you've come to expect from The Pains and a snazzy little stun-guitar solo to boot.

“Falling Over” has also become a staple of the band's live sets and shows a new side of the band. A brooding synth-led tune that recalls New Optimist touchstones like Orange Juice and Aztec Camera, “Falling Over” is as yearning, lovelorn and dreamy as pop gets, and an excellent addition to The Pains' canon. “Twins” turns up the fuzz, a mid-tempo rocker with a sing-along chorus and catchy-as-heck guitar lead as the hook. This is quintessential Pains of Being Pure At Heart -- slot it into a mix tape between Teenage Fanclub and an old Lilys song and you'll be happy as a clam.

Rounding out the EP is an incredible Balearic dub-disco remix from ace UK producers Saint Etienne. Spacey yet totally danceable, the Saint Etienne remix is certain to burn up the dancefloor.

Higher Than The Stars is the start of the next chapter for The Pains of Being Pure At Heart and it looks to be just as exciting as the first.