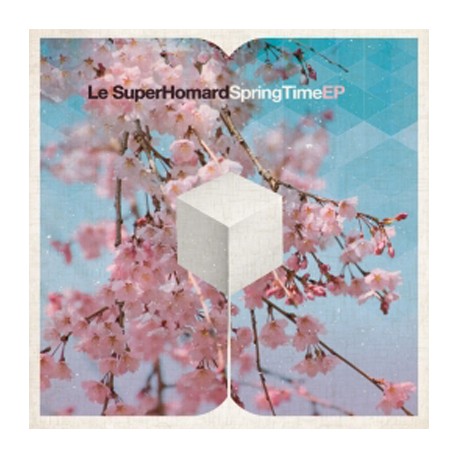 LE SUPERHOMARD are a french quintent led by Christophe Vaillant, a musician with a history of mod-styled formations, like the band THE STRAWBERRY SMELL and PONY TAYLOR, and who in 2015 began a solitary project that his brother Olivier later joined and which has continued taking shape to become what it is today.

“Springtime EP” includes two songs from the album and two previously unreleased songs, on a 500-copy numbered-limited-edition pink 7” vinyl. “Springtime”, one of the songs from the album, opens the Single: it’s martial, spacey synth-pop, between Étienne Daho and THE HUMAN LEAGUE, with Julie Big’s precious voice. But don’t be fooled - “Springtime” is a great single that showcases the band’s abilities and their great use of synthesizers, but it is immediately followed by the instrumental “Overflight” that aims for the musical principles that “Meadow Lane Park” (the other song from the album) confirms on the B-side: a pop-funk base with echoes of STEREOLAB, resonances of electronic pop, of synth-pop and soft-pop, orchestral arrangements with a lounge spirit, with the level of inspiration of AIR, THE GENTLE PEOPLE, GIORGIO TUMA, THE HIGH LLAMAS, THE UNITED STATES OF AMERICA, Esquivel, KOMEDA, Barbara Moore, Jean-Jacques Perrey, MODULAR and SAINT ETIENNE. The formula is evocative, elegant, with contained emotions and psychedelia... And if we were talking about STEREOLAB, certainly Laetitia Sadier would have loved to have written a song as fantastic as “Under A Charm”, the other previously unreleased song included on this advance Single: analog buffers, between spacey melodies that evoke BROADCAST and delicious strings from a classicist spirit. It’s a winning combination; unheard of but infallible.