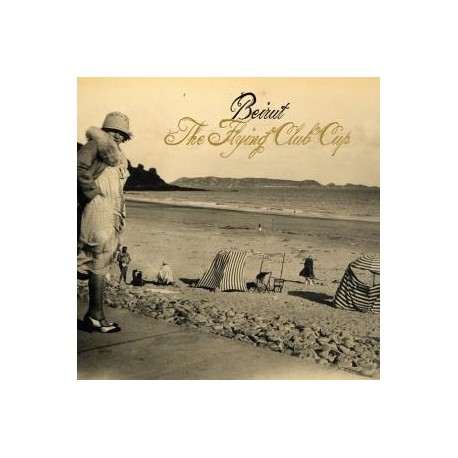 Since its release in May of 2006, Beirut’s internationally celebrated Gulag Orkestar album has soundscanned more than 45,000 copies, and the band has done a tsunami of interviews, photoshoots and features (including NY Times, Spin, Pitchfork, Urb, and Village Voice). This great fervor developed around an album conceived and constructed in a teenager’s New Mexico bedroom.

Six months of recording has led to The Flying Club Cup, an homage to France’s culture, fashion, history, and music. Two years ago, Zach Condon immersed himself in Balkan folk, absorbed sounds, scales, styles, and the sonic joys of a skeletally structured, cacophonic ensemble—and moved west. Soaking up the likes of François Hardy, Charles Aznavour, and, most notably, Jacques Brel (a huge influence on both Scott Walker and Mark E. Smith), Condon has been articulating his conversational French.

Most of the album was created at a nondescript Albuquerque office space, a.k.a. A Hawk and a Hacksaw’s practice room; Heather Trost plays violin and viola on three songs. Engineering and production assistance came from Griffin Rodriguez (A Hawk and a Hacksaw, Man Man). He helped separate the many instrumentalists involved in recording, as opposed to Gulag’s largely solo flight. The orkestar, which has solidified into a core group of eight members, has grand plans for replicating the album live, and is now an integral part of Beirut’s identity. Additional recording was done with Owen Pallet (Final Fantasy) at the Masonic church studio owned by The Arcade Fire.

Within the spectacle and intimacy of The Flying Club Cup, you can hear a love letter to the joie de vivre that defines our existence. Listen closer, and you also hear the emergence of a singular musical talent—Mr. Zachary F. Condon, at present living in Paris—unbounded by cultural borders and by where his heart travels. A September-October tour of nice theaters in large U.S. cities is in the planning stages, as are more dates in 2008.