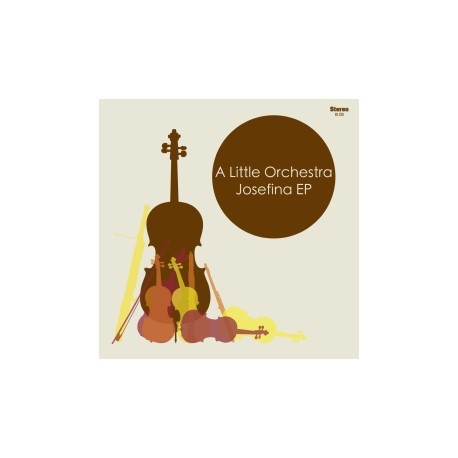 2 The Permanent Way [With Darren Hayman]

A LITTLE ORCHESTRA, as their name itself indicates, is a small pop orchestra with eleven members, based in London and originally founded at the beginning of 2010 by Monster Bobby, who was one of the main people responsible for the first period of THE PIPETTES. Their versatility and extensive line-up (which includes flutes, violins, violas, and clarinets) has led them to diversify their repertoire: from performing small classical pieces to writing their own songs, playing as a band for renowned names like Darren Hayman, Elizabeth from ALLO DARLIN’, THE PIPETTES, POCKETBOOKS, Shirley Lee from SPEARMINT, and THE LOVES. Their physical format debut has finally arrived with “Josefina”, this limited edition 7” that includes 5 amazing pieces that also include some distinguished guests. Let’s go step by step.

The first song, “Josefina”, which Neil Hannon himself would have been happy to have written, is a beautiful gem with folk origins that includes the fantastic collaboration of the English group, MODEL VILLAGE, and the sweet lyrical voice of Rachel. This wonderful song puts the cards on the table and makes the mastery of the arrangements perfectly clear, not to mention it’s loaded with high voltage emotions. Darren Hayman, the once front-man of HEFNER, writes and sings “The Permanent Way”, tracing the missing link between THE BEATLES and THE ESSEX GREEN; folk, pop, and psychedelia all together in one absolutely magical dose. “Treacle”, written and sung by Simon Stone of THE LOVES and KNICKERS, sounds as if THE BEACH BOYS dreamt of Mozart, or as if Scott Walker were singing a heart-felt song to his long-lost brother, who watched him jubilantly from some hidden corner of paradise. “East Coast” stars Gordon McIntyre of BALLBOY, another illustrious character from the British indie-pop scene who lets himself get carried away with the elegant and evocative melodies and arrangements of the chamber group, making it clear what would happen in the hypothetical situation of Adam Green making a pact with Lee Hazlewood to pay homage to THE LEFT BANKE. The group closes the magnificent and unusual release alone, with an instrumental song written by Monster Bobby that clocks in at just under two minutes; “Clocks, Part 2” is a luminous and melancholic wonder.