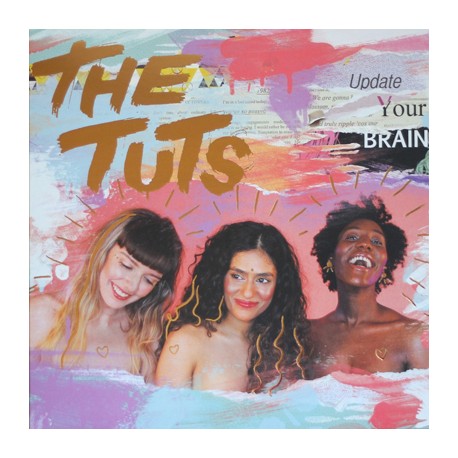 TUTS (the) : LP Update Your Brain

The Tuts have long been one of the best and brightest new bands in the UK, for what they do and what they represent. This all-female, all-feminist, DIY “3-Tone” trio (of proud Caribbean, English and Indian/Pakistani origin) are avatars in the ongoing debate over inclusivity in the music scene, as well as a powerful musical unit by any standards. The Tuts have conclusively confirmed that a band can still survive and thrive on today’s terms with the right combination of graft and tenacity, building a fan base so strong that they hit their album crowd-funding target on Pledge Music within 5 days of the launch. They met as teenagers and learned the fierce working-class work ethic that has them literally doing-it-themselves, with no manager, plugger, or booking agent. Meeting Kate Nash led to a tour support slot and EP collaboration in 2013, bringing them to the attention of Billy Bragg, who invited the Tuts to play at Glastonbury. The Selecter's Pauline Black witnessed the occasion and booked the band for a national tour.

The Tuts’ ambition to write the greatest, catchiest songs they can within the parameters of a stripped-down sound results in a series of pop punk nuggets on this debut. Update Your Brain turns up the clarity and power while losing none of the band’s bite or edge. The album has a selection of classic Tuts tracks: “I Call You Up” from their first EP, “Dump Your Boyfriend” from their second, and stand-alone single “Tut Tut Tut”, all toughened up from re-recording, with vocal harmonies and hooks sharply intact. But the highlights here are new material; latest single “Let Go of the Past”, live favourites ”Same Shit” and set-closer “Back Up”, and brand new songs “Con Man” and “1982”. The album also gives us “Sway”, “What’s on the Radio?” and “You’re So Boring”, the last a stand-out acoustic track showing an overt Pete Doherty influence.

The band's lyrics range from experiences in the music scene to snapshots of everyday life, politics and personal relationships, with an endearing simplicity and deftness of touch. Simply put, The Tuts have taught themselves the art of songwriting. Masters of crafting the sort of tunes that can stay in your head for weeks after a single hearing, if the group had anything left to prove then this record lays that to rest, with a dozen songs to satisfy their fans, yet leave them wanting more. A perfect debut album, then, and given that they show no sign of running out of either songs or steam, a band to keep a close watch on in future.