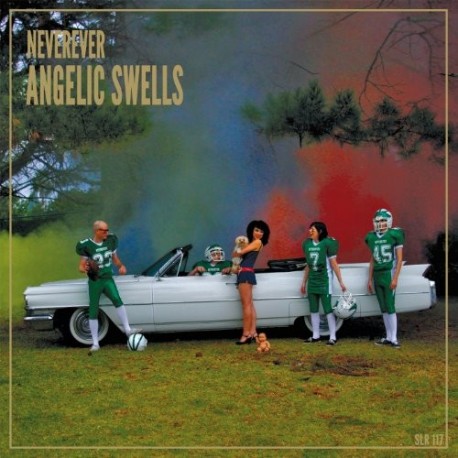 1. Here Is Always Somewhere Else

Jihae and Wallace Meek are a couple with a keen ear for POP who've travelled the world together in search of the perfect tune. Having met in Glasgow while Ms. Meek was the singer for pop phenoms The Royal We and Mr. Meek helmed the excellent Bricolage, they eventually relocated to LA to soak in the sunny vibes and pop history. Surrounded by stacks of dusty 45s, crack musicians and dinette counters lined with hopefuls and has-beens, they set about on the next stage in their musical journey. Neverever is their new band, a tough group with a flair for echoey three minute symphonies, marrying classic pop melodies with punk-informed crunch and glam-infused 70s stomp.

Angelic Swells is the their debut album, and it's a remarkable effort that takes in 50s rock 'n roll, 60s girl-group sounds, the 70s glam heyday of Slade and Suzi Quatro and 80s power-pop on its way to creating a bang-up-to-date idea of what pop should sound like in 2010. It’s a timeless sound: fuzzy riffs, pounding rhythms and tales of teenage love and lust. In other words - classic POP. From the epic, widescreen opener of "Here Is Always Somewhere Else" to the breathless tale of adolescent sexual awkwardness that is "Coconut Shampoo" to the slow-dance swoon of "16th Wonder," every tune could be a lost hit echoing from a crackly AM radio. Not that there's anything lo-fi happening here; the band worked hard with Jeff Ehrenberg at famed LA studio Infrasonic (No Age, Beck, Peter Case) to give Angelic Swells that warm, technicolor sound that marks so many great records.

First single (under the name The Champagne Socialists) "Blue Genes" is here in freshly recorded form, its catchy guitar riff and rama-lama drums literally jump from the speakers and head straight for your feet, sure to pack the dancefloor and get you hand-clapping along with the chorus. "Young Runways" and "Teardrop Tattoo" go for a Shadow Morton vibe, updated slices of girl-group goodness that re-imagine the Shangri Las as they might have sounded playing at CBGBs in 1976: brilliant power-pop for the ‘00s with nods to Blondie and Shop Assistants along the way. The power-pop connection is made explicit by Neverever's cover of The Plimsoul's "Now," which fits in so well with the rest of the songs that you'd think it was an original. The albums end with a bang with "Underwater Ballet," two and a half minutes of glorious pop stomp that accelerates to a cacophonous finale.

Neverever know their pop history, but they also know how to write great songs and Angelic Swells provides ample evidence of that. It is a an ambitious, iconoclastic record packed with rambunctious riffs, rumbling drums, ear-nagging melodies and, most of all, timeless tunes.