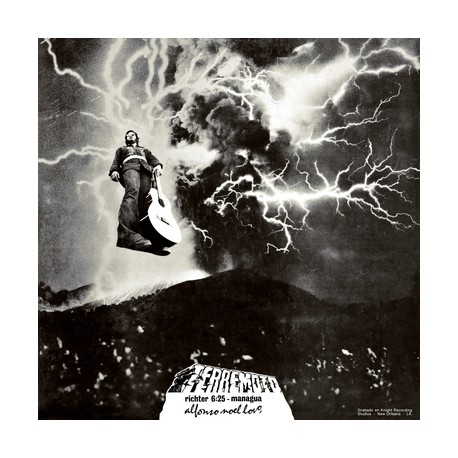 7 In The Woods Of The Moon

On 23 December 1972, after midnight, an earthquake with a magnitude of 6.25 on the Richter scale devastated Managua, the capital of Nicaragua. Thirty deadly seconds were enough to destroy the centre of the city and cause a death toll of 19.000 people, with 20.000 injured. The aftershocks and fires caused by the disaster exacerbated this appalling situation.

In the world of art, the inspirational power of great tragedies is widely known; leveraging the excess negative energy generated and transforming it into pure creativity and beauty is a wise way of confronting disasters and trying to get over them.

Alfonso Noel Lovo, a young Nicaraguan musician, studies marketing at the Louisiana State University. New Orleans, the inspirational musical mecca, is only an hour from Baton Rouge; Alfonso plans to record his ideas there over free weekends during the academic year. Despite his youth, Alfonso "Poncho" Lovo has already accumulated an interesting musical curriculum and lived several times over.

Member of a well-known family in Nicaragua, Poncho comes from a clan of livestock owners involved in big business. Son of the Minister of Agriculture and later triumvir of the Government Assembly, he was on a plane returning to his native land on university vacation when it was hijacked in 1971 by a Sandinista group. He was recognised in mid-flight by one of the hijackers, who had gone to school with him, and used as a hostage to negotiate the release of a political prisoner. When the conversations between the Government and the guerrilla broke down, Alfonso Lovo was shot several times. Miraculously he survived, albeit seriously wounded in the torso, abdomen and left hand (which nearly had to be amputated). After complicated surgery and several life-threatening operations, a convalescent Alfonso Lovo returned to university in New Orleans. Thanks to heavy doses of therapy and determination, he managed to play the guitar again.

New Orleans was the place where all his influences and intense experiences would crystalize into his incredible and passionate first album: "Terremoto Richter 6:25 – Managua". The recordings come from late night sessions during the weekends. Improvisation predominates. The studio owner, Tracy Borges, helped him to get session musicians like the great Michael, flautist and sax player for Bourbon St. The New Orleans female soul choir also features on the record. Poncho recruited his compatriot Silvio Lacayo on acoustic guitar, Cristóbal, a Colombian timbales player who was a legendary percussionist in the clubs there, and Marcos Ostrander, a conga player from Panama. Alfonso himself drew on his many resources, playing piano, guitar, bass and even playing everything on some tracks, including the drums (in the case of 'Hijack', conceived as a recorded rehearsal, pure studio improvisation).

"Terremoto" is a marvel of essences; it distils freshness, ingenuity and the desire to experiment with limited resources. Poncho took each recording home and worked on them in his student room with a TEAC 3300, a wonderful semi-pro recording studio used back then. He listened over and over to the initial tracks "to invent what to add afterwards" in the next session. This work and preproduction method bore fruit and Alfonso would use it again masterfully in his next work, the quintessential "La Gigantona". His first record delivers a refreshing mix of psychedelic rock, mazurka, jazz, Louisiana blues and African folk. High temperature, vibrant music; sounds that shimmer in your head. A lively and passionate work, shot through with the immediacy of youth but underpinned by the maturity of someone who has already chosen his path in life.

5.000 copies of "Terremoto Richter 6:25 – Managua" were released and the album sold in stores and via direct orders; a bank bought a thousand copies to give to its clients as a gift. As a result of the war waged over the following years, many copies were lost and, until today, it has been a much sought after and absolute cult album from the Latin underground of the 70s.