> SUPPORTS>HAYWAINS (the) : Who Needs Summer? 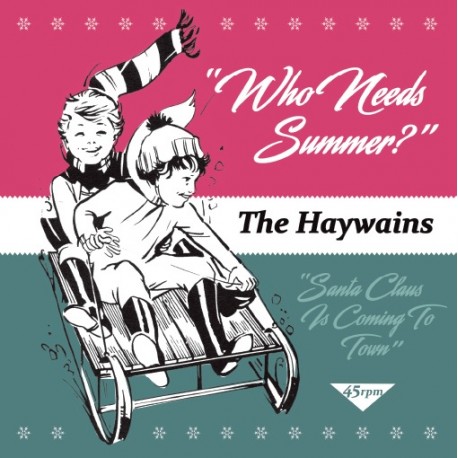 HAYWAINS (the) : Who Needs Summer?

Santa Claus Is Coming To Town

The A-side of the single, 'Who Needs Summer?', penned by gitarist Paul Towler, is a catchy indie pop song, sung by vocalist Jeremy Hunt in his distinctive vocal style, that celebrates the joys of being together with your newfound love around Christmas time – because, who needs Summer, if you can be warm and cosy with the one you love! The song has all the classic Christmas ingredients: festive keys, sleigh bells and even some children doing background vocals.

The Haywains' version of John Frederick Coots and Haven Gillespie's classic Christmas song 'Santa Claus Is Coming To Town' starts rather unusual – with some merry whistling. From there, the song contiues in the jangling pop punk style The Haywains became known (and loved) for.

The Haywains formed as a six piece in 1988, in Bristol, England, and were part of the thriving twee pop / 'C86' scene of those days. Singer Jeremy Hunt and guitar player and main songwriter Paul Towler had already played together six years earlier when they were just 16, in a band that did mostly Undertones-covers. The Haywains debuted with the 'Surfin' Trowbridge EP', a flexi-disc issued with Newcastle based fanzine 'Woosh!'. In 1989, the band's first 7" single 'Fisherman's Friend' was released on their own 'Emily's Shop' label and was played by legendary DJ John Peel on his radio show. More singles followed on labels like Four Letter Words (USA) and Blam-A-Bit (Germany) before the band signed to Vinyl Japan in 1991, on which label they released two albums: 'Never Mind Manchester, Here's The Haywains' and 'Desperately Seeking Something'. In 1992, the label also reissued the band's hard to find early singles as the compilation CD 'Get Happy With The Haywains'. After a final single for Spanish label Elefant Records, The Haywains called it a day Summer 1996. In 2013 The Haywains reformed with four original members, for a range of shows to celebrate the 25th anniversary of the band's formation. As things worked out so well, the band decided to stay together and also work on new songs, which lead to three 7”'s: 2014's 'Get On Board With The Haywains' on American label Cloudberry Records, 2015's 'Bobbie Gentry's Tears' on UK label Dufflecoat Records and the forthcoming 'Girl In The Holly Court Diner' on new UK label Whoops! Records. The band is now based in Midsomer Norton, England.