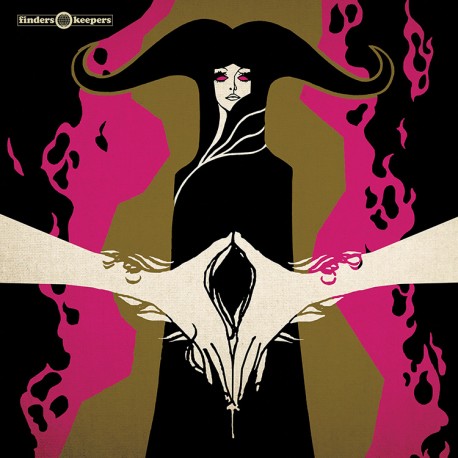 Not content with liberating what many consider the rarest soundtrack on BOTH the cut-throat Italian and Japanese collectors markets.

Not content with liberating what many consider the rarest soundtrack on BOTH the cut-throat Italian and Japanese collectors markets (with the repress of the music to Eiichi Yamamoto’s erotic-historic Pinky anime psych cinematic feature Belladonna Of Sadness), Finders Keepers Records return to the composer Masahiko Sato’s bottomless well in an attempt to retrieve the elixir which enticed us in the first place. From a clutch of thirteen lost cues which never appeared on the mythical Italian-only soundtrack album, this limited 45rpm single finally combines the two elusive freak fuzz tracks that aficionados unanimously agree to be the finest themes to feature on the film.

Encompassing virtually all of the free jazz and screaming psych signatures found on Masahiko’s own albums and collaborations, such as Amalgamation, Yamataifu and Rumour (all recorded around the same era), these two tracks also hear Sato experimenting with hard rock rhythms and afro rock aesthetics devised to enhance the flamboyant and erratic folkloric storyboard of the film. Not scared to deploy radical 1970’s studio devices like guitar fuzz pedals and keyboard ring modulators Masahiko literally pulls out all the stops with his organs, synths and pianos to deeply coat artist Kuni Fukai’s most eye-popping scenes with his own sonic equivalent of hallucinogenic face melting mayhem. Complete with rhythm players and soloists from his associated bands The New Herd and The Soundbreakers these two tracks alone draw comparisons with the likes of Wolfgang Dauner (with whom Sato was a firm friend during the recording of albums like Output and Fur) and will certainly strike similarities to Miles Davis’ Filmore/ Bitches Brew period, but never without his own distinct Japanese jazz flavour, thus placing these tracks alongside other rare and unreleased psychedelic recordings such as J. A. Caesars music for the films of Shuji Terayama and Toshi Ichiyanagi and April Fools music for Yoshishige Yoshida’s Eros Plus Massacre.

Continued comparisons to Alain Goraguer’s animation soundtrack for La Planete Sauvage can be attributed to Sato’s use of Rhodes electric pianos, but as one of the first three people to import a Moog synthesiser to Japan (a key player on the collectable Electro Keyboard Orchestra), Sato’s tracks on this 45 successfully convey his wash of electro enhanced layered noise that illustrates the films pivotal plague scene in which Fukai paints an unforgiving black sea over the world to avenge the honour of the films traumatised leading protagonist. Complete with the obligatory chase scene which provides a backdrop for the films frenzied witch hunt segment Sato successfully turns his hand to a unique blend of Japanese afro rock (which in its deft execution shares unlikely similarities with Finders Keepers’ Iranian anthem Helelyos by Zia) proving the composer to be a versatile and forward-thinking musician who in the case of this genuinely mythical (in all senses of the work) soundtrack has arguably created his unrivalled cinematic masterpiece.