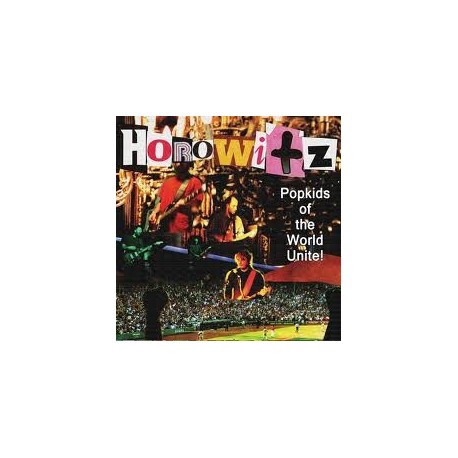 Horowitz are indiepop duo Pete Bowers and Ian Evans (a trio if you include their everpresent drum machine!)

3. Popkids of the World Unite!

4. How to Look Imploring

5. The Boy From Whatstandwell

7. I Was the Son of a Teenage Comicbook Superhero's Sidelick

10. Sweetness, I Could Die In Your Arms

14. The Drunks are Writing Punk Songs

Popkids of the World Unite! is a compilation collecting together the output of Horowitz between 2004 and 2009. Here's the science bit: Two indiekids-at-heart + one cassette + five compilations + four EPs + three 7" singles = seventeen fizzing, noisy, lo-fi pop songs!

In that time, Horowitz also managed to fit in their debut album "Frosty Cat Songs", play at virtually every indiepop alldayer and popfest imaginable - including Indietracks - tour across Europe and even fit in a date at the New York Popfest.

Of legendary independent and DIY spirit, Pete & Ian could probably kick back and, observing the current crop of excellent indiepop bands (The Pains Of Being Pure At Heart, Allo' Darlin, Standard Fare - they've played with them all), consider their job done: The popkids of the world genuinely are uniting.

But Horowitz are not ones for resting on their laurels. They’ve already got more releases planned and gigs aplenty. Here’s to five more years of Horowitz pop gems!