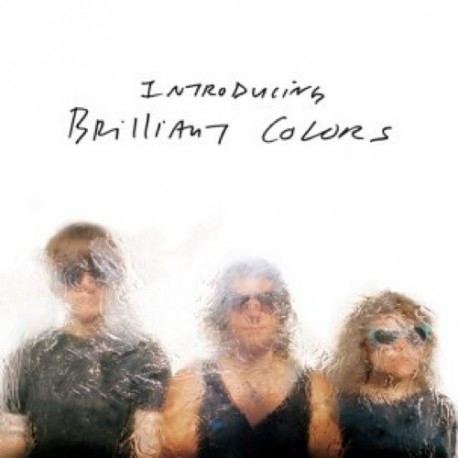 Singer/guitarist Jess Scott started Brilliant Colors in early 2007, and she's been mighty busy since then. After a steady stream of line-up changes, Scott has finally settled on a permanent line-up with the addition of East Coast transplants Diane Anastasio and Michelle Hill (a veteran of a number of Bay Area underground punk outfits, as well as touring guitarist for legendary UK punk / dub group The Slits!), in the meantime sharing bills with fellow Bay Area acts Nodzzz, Grass Widow, and Ty Segall and opening for the likes of The Urinals and The Homosexuals. Following up two sold-out singles (on Make A Mess and Captured Tracks) and mounting fervor from all corners of the pop underground blog-o-world, Brilliant Colors' debut album drops just in time to secure its place as an undeniable contender for best pop record of 2009. Introducing, recorded in Portland, Oregon by Mississippi Records' Alex Yusimov, marks a great leap forward for Brilliant Colors.

The band has honed their songwriting to a fine edge, delivering ten tracks of sharp, subtly catchy indie pop that finds them more assuredly rounding out the corners of their DIY punk-meets-Shop Assistants, '78-'86 pop collision. Opener "I Searched" is a fully formed pop classic that drifts through the speakers on the back a wistful, echoey vocal, while "Absolutely Anything" picks up the pace with a buzzing guitar attack and a chorus hook that would make Joey Ramone proud. The trio is at their best on songs like "Over There" and "Yell In The Air," tunes that are emblematic of the perfect middle ground that Scott has struck between the crunch and drive of punk and the spiky DIY melodicism of early Rough Trade and Flying Nun bands.

Introducing is a sharp debut album packed with taut guitar buzz and dreamy melodies, neatly expanding on the promise of those in-demand 7" singles. Clocking in at barely twenty-four minutes, it's focus and concision is the perfect encapsulation of where we think pop should be in 2009. Side-stepping all of the indie scene pigeonholes, Brilliant Colors have produced a scrappy gem of a record.