> CATS ON FIRE : Our Temperance Movement 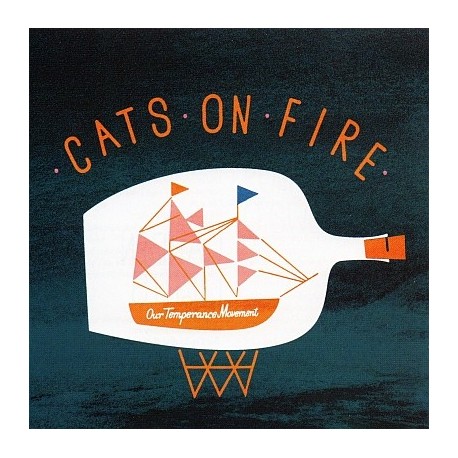 CATS ON FIRE : Our Temperance Movement

2. Lay Down Your Arms

3. Letters From A Voyage To Sweden

6. Tears In Your Cup

8. The Borders Of This Land

All Music Guide declared it “a classic-in-waiting filled with durable, memorable, carefully constructed songs, almost any one of which could have been a single;” while NME called it “an indie-pop hallelujah” and Q Magazine wrote “Cats on Fire hit a high mark few other earnest young men can get near.”

The new album ‘Our Temperance Movement’ is even better still, demonstrating the band’s flair for delivering sumptuous jangle pop with enticing melodies and intelligent lyrics. The album expands upon the traditional guitar, bass, and drums with liberal bursts of piano, organ, clarinet, banjo, glockenspiel and other percussion which help to showcase the extraordinary style of singer Mattias Björkas and his poetic, sardonic, and rather eccentric take on the world.

Among the album’s many highlights, ‘Horoscope’ tackles a classic relationship challenge with a lovely dose of female backing vocals, while ‘The Borders Of This Land’ is jaunty, smart continental pop with just the right amount of attitude. Meanwhile, ‘Letters From A Voyage To Sweden’ sets the tale of a seedy ferry ride between Scandinavian countries to jangling guitars, and ‘The Steady Pace’ opens with a double entendre before layering in Spanish guitars and building to an absolutely soaring chorus. Perhaps the best of the bunch, however, is infectious indie hit ‘Tears In Your Cup’ which boasts shimmering guitars and an overall panache that will have you reaching for the repeat button straightaway.

Inspired, confident, and incredibly well executed, ‘Our Temperance Movement’ is top shelf indiepop from one of the most exciting bands today. The band is promoting the album with an appearance at the New York City popfest in May and a host of live dates across Europe.