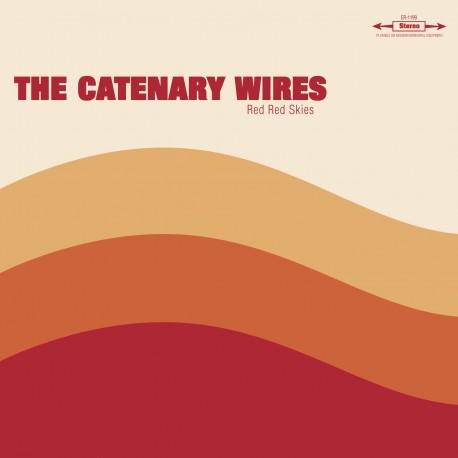 This project is a development of the sadder, more melancholic songs of their career; it is elegant and serene without letting go of the pop melodies. Amelia and Rob have been behind some of the best indie-pop songs of the past 30 years, whether it was from their time with TALULAH GOSH, HEAVENLY, MARINE RESEARCH, or TENDER TRAP. THE CATENARY WIRES started when the two left London and found themselves in the middle of the countryside, with no clubs, no record stores or guitar shops, and no indie scene. They had disbanded TENDER TRAP, and they started writing songs with only a child’s acoustic guitar, just for their own entertainment. Everything changed when they were invited to play at the Arnolfini Art Gallery in Bristol, at an event celebrating their old label, Sarah Records. They played a few HEAVENLY songs, but also took the opportunity to try out some new material. The result was so exciting that it has brought us to this point, and this mini album, “Red Red Skies”, which will be released on June 1st, on clear 10” vinyl, on CD, and in digital format.

There are eight delicious songs, starting with “Intravenous”, which we already heard as the advance single. It’s a beautiful song that explores the mutual dependency that happens in romantic relationships and the subsequent loss of control of your own fate, and also the fear of dying and leaving the other person. “When You Walk Away” talks about those relationships that you begin with the full knowledge that they won’t last. Inspired by Leanne Shapton’s novel “Important Artefacts and Personal Property from the Collection of Lenore Doolan and Harold Morris: Including Books, Street Fashion and Jewelry”, its raw vocal reminiscent of Karen Peris’ and Paula Frazer’s. “A Different Scene” leaves us with a sense of resignation and with the image of confetti suspended in the air, dancing at the will of the wind. It’s the sweet taste of sadness. “The Records We Never Play”, however, shines with the brightness of MOJAVE 3 and the solemnity of TARNATION, taking us into a relationship that reinvents itself from the smallest details up. Another postcard from our journeys of the heart.

“Throw Another Love Song On The Fire” gives us even more brilliant lyrics, telling the story of heartbreak, but it is also a satire of songs about heartbreak. Superb, with the depth of Rob’s voice evoking Johnny Cash, while he sings “thanks for making me unhappy” and invokes Stephin Merritt. “Too Late, I Love You” moves us with its delicateness, like an innocently whispered confession, the admission of a weakness that makes beauty and emotion suddenly appear. “Like A Fool” has classical structures, a perfectly constructed song with a bare acoustic guitar, showing love in its simpler, more naive, appealing form. “Things I Love” closes the mini album with a list of records, artists, painters, and directors that our authors adore, increasing the feeling of intimacy and of this album being made to be told and sung, whispered and delivered, with hands open and palms up.

The collection of songs is produced by Brian O’Shaughnessy (who has worked with people like DENIM, Beth Orton, BIRDIE, GO-KART MOZART, THE CLIENTELE, COMET GAIN and ALLO DARLIN' to name a few), and it reminds us of the sounds of other pop-spirited duos like Nancy Sinatra and Lee Hazlewood, Claudia Gonson and Stephin Merritt, and Serge Gainsbourg and Brigitte Bardot. They have always been a magical duo, but with this new project, back-to-basics, they rise even higher than that paradise they earned for themselves decades ago.