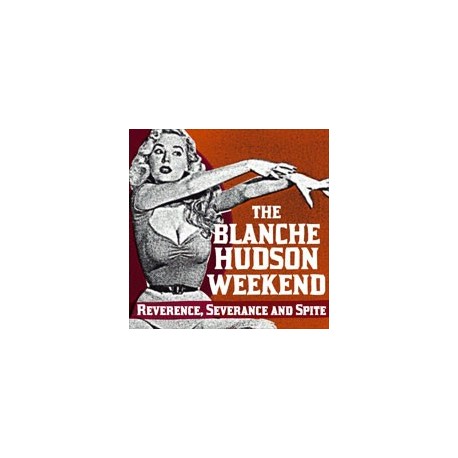 The Blanche Hudson Weekend, still less than 1 year old and with only 3 single releases so far, have decided to compile all the tracks from those aforementioned 7" plastic platters onto one CD, alongside a handful of brand new recordings and a couple of leftovers from their very first recording session. All this stuff makes for one essential sugar coated blast of fizzbomb pop delivered without too much spit n' polish but with a whole fistful of cool. The debut 7", The Letters To Daddy EP, was an instant hit—selling out of its initial run in just a few weeks and boasting the fantastic Shirelles meets The Shop Assistants pop thrill of Crying Shame, plus the ultra fuzzed up The Last Ride and Noise And Fury.

People were eager to hear more, and a few months later that's exactly what they got. The Rats In The Cellar EP was released on Odd Box Records and found the band in a sinister mood. All 3 tracks were slower, darker, more menacing in tone—but no less powerful. Heavily influenced this time by The Velvet Underground and Galaxie 500, The Rats in The Cellar EP revealed another side to The Blanche Hudson Weekend.

Shortly after came the Hate Is A Loaded Gun 7" EP featuring the poppiest track so far, Let Me Go, sitting alongside 2 of the darkest tracks yet—the frankly eerie and disturbing So Sick, and the beautiful pop of Song For Kristen.

Of the brand new recordings here, there's the anthemic Union Square Blackout, the haunting David Lynch inspired tracks Drifting and Take Me Back, one of the best pop songs the band have recorded so far—Just Another Guy, the almost Mersey Beat/early Bangles influenced jangle pop of Seven Days A Week Nightmare, and the chugging Velvet Underground inspired Fever Van. There's also a couple of demo recordings that were the first things The Blanche Hudson Weekend ever committed to tape (literally, a reel to reel tape) - Time Enough At Last (a track left over from Darren and Caroline's days in The Manhattan Love Suicides) and Love Vacation. Ultra lo-fi , hastily recorded, but included here because... well, because they're good songs. Simple as that.

With a debut album in the works as we speak, Reverence, Severance And Spite is perfect listening for anyone who wants to hear the full collection of what The Blanche Hudson Weekend have come up with so far, while simultaneously giving an indication of what is still to come from this band.